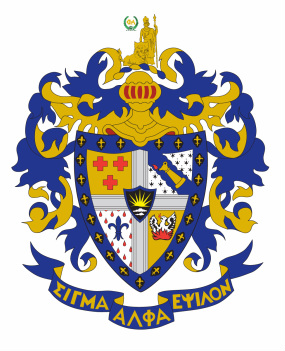 HISTORY
The fraternity of Sigma Alpha Epsilon was founded in 1856 on the University of Alabama campus. Sigma Alpha Epsilon, or SAE, currently has chapters in 49 states and has initiated more than 280,000 members. SAE was the first fraternity to be founded in the south. Of all existing fraternities today, SAE is the only one that was founded in the south. The founders of SAE were Noble Leslie DeVotie, Nathan Elams Cockrell, John Barratt Rudulph, John Webb Kerr, Samuel Marion Dennis, Wade Hampton Foster, Abner Edwin Patton, and Thomas Chapel Cook. None of the original SAE founders were members of another fraternity, and the original plans for the fraternity was to keep its chapters confined to the southern states.
The creed of SAE is called the True Gentleman and was officially adopted as the fraternity creed in 2001. Sigma Alpha Epsilon communicates with its members on the national level via their publication The Record, which is published quarterly. The mission of Sigma Alpha Epsilon is to promote the highest standards of friendship, scholarship and service for its members based on the ideals set forth by the founders and as specifically enunciated in the creed.